Copyright: © 2017 Gong Y, et al. This is an open-access article distributed under the terms of the Creative Commons Attribution License, which permits unrestricted use, distribution, and reproduction in any medium, provided the original author and source are credited.

Objective: Several plasma proteins, such as Angiopoietins (Ang), Tumor Necrosis Factor (TNF), Serum Amyloid A (SAA), Soluble Intercellular Adhesion Molecule (sICAM-1), Von Willebrand Factor (vWF), and Tie2, have been implicated as potential biomarkers of vascular integrity and angiogenesis in traumatic brain and vascular injuries (TBI and TVI). Our goal is to test the hypothesis that (1) plasma biomarkers of vascular integrity and angiogenesis can assess TVI during chronic TBI; (2) Cerebrovascular Reactivity (CVR) may be a sensitive biomarker in chronic TBI and TVI and may correlate with the plasma biomarkers. Design: Plasma levels of 18 proteins were measured using high sensitivity electro-chemiluminescent sandwich immunoassays (Meso Scale Discoveries, LLC). Subjects were 23 patients with chronic TBI and persistent post-concussive symptoms (PCS, TBI-Sx), 9 chronic TBI patients without PCS (recovered TBIs or TBI-Rec), and 21 healthy controls (HC). TVI was assessed using MRI by measuring CVR-CO2 by assessing the BOLD response to hypercapnia. All subjects underwent MRI with hypercapnia challenge. Nominal a=0.05 was judged to be statistically significant. Results: Plasma concentration of Ang-1 was decreased in patients with chronic TBI with symptoms (TBI-Sx) compared to HC or TBI-Rec (p<0.05), as was the ratio of Ang-1/Ang-2 (p<0.05). SAA was decreased in TBI-Rec patients compared to the TBI-Sx group (P<0.01). CVR-CO2 was decreased in TBI-Sx group compared to HC (P<0.05). Baseline CVR-CO2 correlated with plasma levels of VEGF, VEGF-C, and P-selectin in all TBI patients, but not in HC group. Conclusions: A panel of plasma biomarkers (Ang-1/Ang-2, SAA, VEGF, P-selectin, and vWF) and assessment of CVR may be useful as predictive biomarkers for therapies designed to improve cerebrovascular function after TBI.

Traumatic Brain Injury (TBI) is a complicated injury. In the US, the prevalence of TBI is at least 2.5 million and TBI is a contributing factor to 30% of all injury-related deaths [1]. Approximately 3.2 to 5.3 million people live with long-term physical and neuropsychological disabilities attributable to TBI [2]. Presently very limited reports were found on confirmed diagnostic biomarkers and effective treatment of TBI. Several plasma proteins have been implicated as potential biomarkers of vascular integrity and angiogenesis in systemic cardiovascular disorders and TBI. TVI is a common finding in TBI. For example, angiopoietins (Ang) are hallmarks of vascular injury [3]; serum SAA, which has been found to increase after abusive head trauma not evident from neuroimaging, is a potential biomarker for mild TBI [4]; levels of TNF and sICAM-1 in the cerebrospinal fluid (CSF) are increased after severe TBI [5]. Exercise improves recovery after ischemic brain injury by inducing the expression of Ang-1 and Tie-2, indicating their protective potentials for vascular integrity [6]. VEGF has also been reported to enhance reconstruction of neurovascular units in the brain after injury [7].

As a more recent potential biomarker of TBI, serial monitoring of CO2 cerebrovascular reactivity (CVR) was attempted in the evaluation of sport concussion and mild TBI (mTBI) [8,9], which were usually undetectable by regular CT or MRI imaging.

Thus, the aim of our study is to test if potential plasma biomarkers of vascular integrity and angiogenesis can assess TVI and TBI during the chronic stage after TBI and if CVR-CO2 is a sensitive biomarker in chronic TBI and TVI and correlated with the plasma biomarkers in patients with chronic TBI compare with healthy controls. Because it is harder to collect and treat a reasonable number of acute TBI patients with comparable conditions and test their cerebrovascular reactivity with limited time and funding, we have chosen symptomatic patients 6 months after TBI. They were compared with both the recovered TBI group after 6 months and the healthy group.

This randomized, parallel-group, double-blind trial was designed according to GCP/ICH guidelines and the Declaration of Helsinki. Subjects were 23 patients with chronic TBI and persistent post-concussive symptoms (PCS, e.g., headache, difficulty in concentration) at least six months after TBI (TBI-Sx, mostly from traffic incidents), 9 chronic TBI patients without PCS (TBI-Rec), and 20 healthy volunteers (controls, HC). Subjects are all males and aged from 35 to 39. For the CVR-CO2 study, all subjects underwent MRI with hypercapnia challenge.

The global Cardiovascular Reactivity (CVR) to CO2 was tested in both TBI group and healthy controls (HC). The CVR measurement consisted of 7 minutes hypercapnia challenge to measure the increase in MRI-BOLD signal. Hypercapnia was induced using a Douglas bag fitted with a valve to switch every minute between subjects breathing room air and breathing 5% CO2 mixed with 21% O2 and 74% N. Physiologic parameters, including end-tidal (EtCO2) and breathing rate, was monitored continuously during the experiment.

It was performed by using GraphPad Prism software. Kruskal-Wallis test (one-way ANOVA and Dunn’s multiple comparisons), Mann-Whitney test, and Friedman test were used to analyze changes in biomarker levels, and Spearman test was used to correlate biomarker levels and baseline CVRCO2. Nominal a=0.05 was judged to be statistically significant. 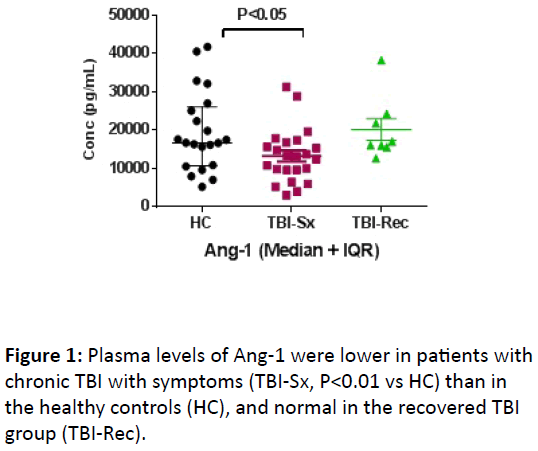 Figure 1: Plasma levels of Ang-1 were lower in patients with chronic TBI with symptoms (TBI-Sx, P<0.01 vs HC) than in the healthy controls (HC), and normal in the recovered TBI group (TBI-Rec). 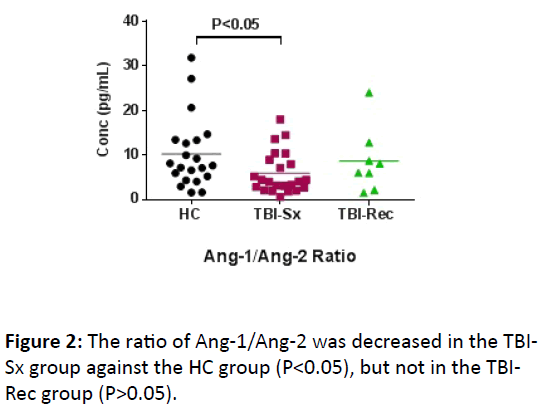 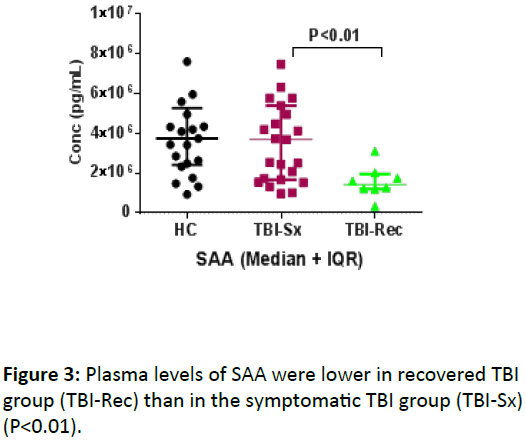 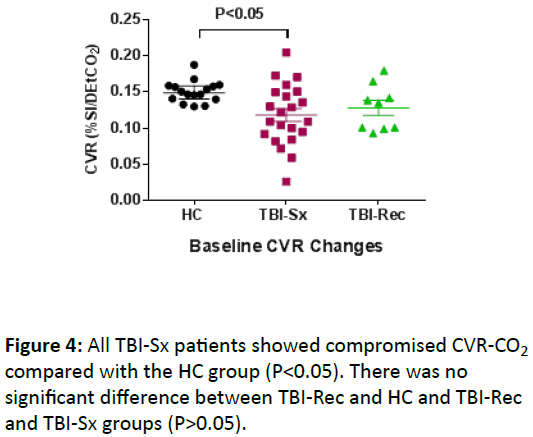 Figure 4: All TBI-Sx patients showed compromised CVR-CO2 compared with the HC group (P<0.05). There was no significant difference between TBI-Rec and HC and TBI-Rec and TBI-Sx groups (P>0.05).

Baseline CVR-CO2 correlated with plasma levels of VEGF, VEGF-C, and P-selectin in all TBI patients, but not in HC group (Table 1).

2. All TBI patients had compromised CVR-CO2, which correlated with plasma levels of VEGF, VEGF-C, and P-selectin. These plasma proteins and CVR are candidate biomarkers for future studies as measures of traumatic microvascular injury.

3. A panel of biomarkers (low levels of Ang-1 and CVR, high levels of Ang-2, SAA, sICAM-1, and vWF) can be indicators of the severity of symptomatic TBI and TVI, and useful evaluations for the diagnosis of TBI and effects of treatment.

It remains a big challenge to develop effective means of diagnosis and treatment for either acute or chronic TBI. Our preclinical trial results have basically supported our hypothesis that (1) plasma biomarkers of vascular integrity and angiogenesis can assess TVI during chronic TBI; (2) cerebrovascular reactivity (CVR) may be a sensitive biomarker in chronic TBI and TVI and may correlate with the plasma biomarkers.

Our study results have confirmed that levels of Ang-1 and Ang-1/Ang-2 ratio were decreased and SAA increased in patients with persistent symptoms after TBI and these were recovered in TBI-recovered patients and healthy controls respectively, suggesting that a panel of plasma biomarkers with low levels of Ang-1, Ang-1/Ang-2 ratio and CVR, and high levels of Ang-2 and SAA can be indicators of the severity of symptomatic TBI and TVI, and are useful evaluations for the diagnosis of TBI and effects of treatment. Ang-1 is expressed mainly by endothelial support cells and Ang-2 is primarily found at sites of vascular remodeling. Increased ratio of Ang-1/ Ang-2 may contribute to breakdown of blood-brain barrier after brain injury, and angiopoietins are thus considered hallmarks of vascular injury and promising therapeutic targets in brain injury [3]. Our results are also consistent with other study reports that SAA may be a potential biomarker for mild TBI and a biomarker in response to inflammation and TBI [4]; Ang-1 and tyrosine kinase-2 (Tie-2) expressed on actively growing endothelium receptor for angiopoietin ligands may be protective factors for vascular integrity, and exercise improves recovery after ischemic brain injury by inducing the expression of Ang-1 and Tie-2 [6]; six biomarkers in CSF (IL-15, MCP-1, VEGFR-1, sICAM1, sVCAM-1, and VEGF-D) correlated with the tau levels in CSF, inflammation, vascular injury, and angiogenesis [10].

On the other hand, some clinical scientists reported that even mild TBI such as sports concussion is associated with compromised CVR [8,9]. We have learned examples of CVR maps in patients with TBI. In healthy young people, the endothelium makes plenty of nitric oxide and CVR was in the normal range. In fact, we noted a slight decrease, which was initially a surprise to us until we learned that it is well known that the vasculature is desensitized slightly to repeated hypercapnia exposure. We’ve proved regional CVR deficits in patients with chronic TBI, which can be a promising pharmacodynamic biomarker of traumatic microvascular injury. Our preclinical studies have further confirmed that baseline CVR positively correlated with plasma levels of VEGF, VEGF-C, and P-selectin. Our results are consistent with other investigators’ reports that elevated levels of IL-8 and sICAM-1 in the CSF may correlate with blood-brain barrier (BBB) dysfunction after TBI; sICAM-1 and TNF-α can induce macrophage inflammatory protein MIP-2 in astrocytes and microvascular endothelial cells; sICAM-1, selectins, and vWF were proposed as biomarkers of vascular endothelial damage and dysfunction [5,11-13]; TBI upregulated VEGF, Flt-1, and Flk-1 [14].

Presently with more funding and patient sources available, we are conducting similar new studies in patients with acute TBI. It certainly deserves our further investigation on the details of baseline CVR correlating with plasma levels of VEGF, VEGF-C, and P-selectin before and after new clinical trials. We’ll also consider new potentially diagnostic biomarkers of TBI and TVI such as microRNA (miRNA) [15] and GFAP or/and S100β [16] with the clinical trials. A newly reported design, The Head Injury Serum Markers for Assessing Response to Trauma (HeadSMART), seems to be a worthy trial to examine bloodbased biomarkers for determination of the diagnosis and prognosis of TBI [17].

Work in the authors’ laboratory was supported by the Center for Neuroscience and Regenerative Medicine (CNRM), Department of Neurology of Uniformed Services University of the Health Sciences (USUHS), and National Institute of Neurologic Disorders and Stroke, Bethesda, Maryland. The contents of this paper are solely the responsibility of the authors and do not represent the official views of the Department of Defense (supervising USUHS and CNRM) or NIH.