Copyright: © 2016 Hassan FAM, et al. This is an open-access article distributed under the terms of the Creative Commons Attribution License, which permits unrestricted use, distribution, and reproduction in any medium, provided the original author and source are credited.

Schistosoma mansoni, a helminthic parasite induces granulomatous inflammation mediated by oxidative stress following deposition of the eggs in the liver. The present study was done to evaluate the efficacy of aqueous ginger extract in ameliorating the damage effects of S. mansoni infection in mice. Fifty-six male and female mice were used in the present study, divided into 4 groups (14 each), three groups were infected with 60 cercariae of S. mansoni, and the other was left without infection as control. Two groups of the infected mice were treated with ginger and praziquentel (PZQ) as standard drug for 5 weeks after the appearance of eggs in faeces. The results showed that the number of eggs in faeces and hepatic tissue was increased in infected mice and decreased with treatment either ginger or PZQ. The level of serum IL-10 as anti-inflammatory mediator was almost increased in all infected mice. Oxidative stress markers in liver, kidney and spleen showed improvement in infected treated mice in comparison with infected mice. In conclusion, aqueous extract of ginger reduced the number of eggs in hepatic tissue and ameliorated the oxidative stress like PZQ.

Schistosoma mansoni is a parasitic platyhelminthes infecting awide verities of society including 52 nations [1].The parasite when infect tissues causes oxidative stress due to progressive reduction in the levels of endogenous antioxidants and increases generation of free radicals [2-3]. Moreover, parasite suppress the host enzymatic detoxification activities which playing a role in pathogenesis of S.mansoni [4]. The acute stage of S.mansoni infection is characterized by the formation of inflammatory granulomatous around deposited parasite eggs. Granuloma formation is a cell-mediated immune response that is dependent on CD4+ T cells sensitized to schistosomal egg antigens and characterized by cytokine production [5,6].

After the discovery of PZQ–tolerant schistosome has caused concern over the development of drug-resistant schistosoma strains. Also, it was reported that PZQ induce haemorrhage in the lung tissue of the host [7]. Therefore, there is a vital need to develop alternative effective drugs to control schistosomiasis without side effects [8]. Ginger (Z. officinal, L.zingiberaceae) which contains zingerone, paradol, gingerols and shogoals is widely used in traditional Chinese medicine [9-10]. It has therapeutic effects such as antibacterial, antifungal, antioxidant, and anti inflammatory and increasing the phagocytic activity and disease resistance against pathogens [11-12].

The present study was carried out to evaluate the efficacy of aqueous ginger extract in ameliorating the pathogenesis of S.masoni infection in mice in comparison with the standard drug PZQ for treatment of schistosoma.

Aqueous extract of ginger was prepared by dissolve thirty gram of ginger powder in sixty ml of distilled water13 then it was sequeezed out through piece of cloth. The filtered was stored at-20ºC, and freshly prepared every three days.

Aqueous ginger extract was orally administered (500mg/kg/day with an oesophageal tube for five weeks or till the ova were disappeared (Mostafa et al. [14]. PZQ tablets (Distocide®) was supplied by Egyptian International Pharmaceutical Industries Company, EIPICO. It was given orally to mice in a dose of 1350 mg/kg body weight for 5th weeks post infection or the ova were disappeared [15].

Faeces examination for S.mansoni eggs: Direct faecal smear method [16] and concentration techniques method were used for examined the appearance of eggs from the first day of infection (three times a week ) until the last week of treatment, after egg appearance in stool of infected mice, the egg of S.mansoni counted in faces specimens according to the method of Cheesbrough [17].

The product of lipid peroxidation (LPO) as TBARS in homogenate of liver, kidney and spleen was estimated according to method of Ohkawa et al. [19]. Nitric oxide (NO) was determined calorimetrically by Griess reagent according to the method of Ding et al. [20].

Superoxide dismutase (SOD) and catalase (CAT) activities were assayed by the method of Misra and Fridovich [21] and Aebi [22], respectively. Glutathione (GSH) content was measured using the method of Beutler et al. [23]. Level of serum IL-10 was measured by using a sandwich enzyme-linked immunosorbent assay technique with capture and detection antibodies ac¬cording to the manufacturer’s instructions (Komabiotech, Korea).

The data are expressed as means ± standard errors (SE). Differences between groups were determined using an ANOVA followed by the student-Newman-Keuls t-test. The level of significance was accepted with p< 0.05.

Morphology and count of eggs in feces

Eggs of S.mansoni in stool were observed at the end of the 6th week post infection It characterized by elongated shape, large size and a lateral spine near the posterior end (Figure 1). The mean eggs counted in faces specimens of infected groups showed there was a significant difference (P<0.001) in all infected & treated groups as compared to infected mice group (Table 1). 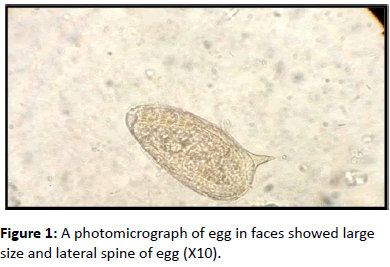 Figure 1: A photomicrograph of egg in faces showed large size and lateral spine of egg (X10).

Morphology and ova count in the hepatic tissue

(Figure 2) showed the morphology of live and dead ova in the hepatic tissue specimen in infected mice with S. mansoni. There was a significant decrease in the number of live ova in liver of infected mice treated with PZQ (P<0.5) in comparison to infected group (Table 2). The level of IL-10 in sera showed insignificant increase in all infected mice group in comparison to control group (Figure 3). 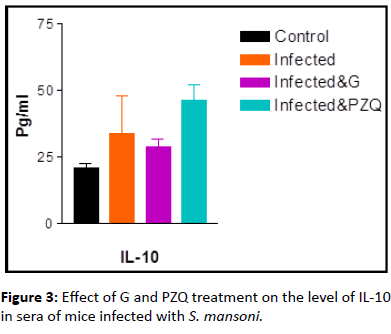 Figure 3: Effect of G and PZQ treatment on the level of IL-10 in sera of mice infected with S. mansoni. 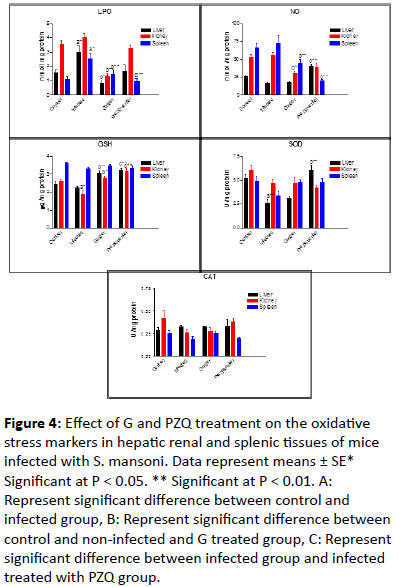 In the present study, the appearance of S. mansoni egg in stool at the end of the 6th week post infection is in agreement with Cheever et al [24] who found that lying of egg begins after S. mansoni matures over a 5 week period in permissive hosts such as the mouse. Moreover, de Oliveira et al. [25]; Walker [26] and Toledo and Fried. [27] Reported that eggs production begins 4–6 weeks post-infection and S. mansoni eggs are large, elongated with a prominent lateral spine near the posterior end. The present study found that ginger extract caused a reduction hepatic egg load. In this aspect, Al- Sharkawi et al. [28] found that the effect of ginger may not on ovum itself but on worm productiveness. Also, this reduction of the eggs load in the hepatic tissue and feces in treated mice may be attributed to the reduction in the worm burden [14].

The present study showed an increase in the level of IL-10 in infected mice which in agreement with Hesse et al. [29] who found that IL-10 was elevated following infection by S. mansoni. The anti-inflammatory cytokine IL-10 is pivotal for the generation of host-protective homeostatic conditions in schistosomiasis [30]. Skin-resident tissue macrophages, which encounter S. mansoni excretory/secretory products during infection, are the first monocytes to produce IL-10 in vivo early post infection with S. mansoni cercariae [31]. Moreover, IL-10 is essential for maintaining a non-lethal chronic infection and reduces hepatocyte damage induced by the parasite’s eggs [32]. Infected mice treated with G showed a decrease in the IL-10 level which agree with Aly and Mantawy. [7] Who found that ginger extract reduces the inflammatory mediators that play a crucial role in Schistosomal liver fibrosis and its complications Also, Allah et al. [33] explained the reduction in colonic IL-10 by ginger due to inhibition of NF-B expression. Also, the present study showed an increase in the level of IL-10 in infected mice treated with PZQ in comparison with infected group. This result in agreement with Wilson et al. [34] who found an increase in IL-10 in PZQ-treated humans and disagree with Brown et al. [35] who found decline in IL-10 level after treatment with PZQ. Aly et al. [36] claimed that the increase in IL-10 with PZQ treatment may reduce the granuloma size.

Moreover, the present study showed an elevation of LPO in the liver, kidney and spleen tissues of infected mice with S. mansoni. It is known that oxidative stress due to schistosomiasis that occurred at the site of granulomatous inflammation leads to the generation of LPO which may play a central role in the pathology of schistosomiasis [37-38]. Because, LPO products caused cell injure and necrosis due to losing the fluidity and integrity of cell membrane [14,39-40]. The present study was found a decrease in NO in liver tissue of S. mansoni infected mice after 12 weeks of infection. It is known that NO contributes in the development of granuloma after 7 weeks of infection and after that it decreased with time through the regulation of Th2 cytokine production [41]. In addition, iNOS activity exerts anti-microbicidal effect against the egg stage of S.mansoni, but it contributes to the pathology of schistosomiasis [42]. However, there is increase in NO in kidney and spleen in comparison with controls. It is known that during inflammation and oxidative stress, nitrite/nitrate is couples with O2- to produce peroxynitrite (ONOO_) a very cytotoxic metabolites [3,43-44].

In the present study, the treatment of S.mansoni infected mice with water extract of ginger caused a decrease in LPO level in liver, kidney and spleen which in agree with previous studies by Mostafa et al. [14] and Baliga et al. [45]. This antioxidant property of ginger was attributed to the ability of zingerone, the main constituent of ginger, to scavenged O2- and OH [46-47]. Also, G inhibited iNOS activity and reduced iNOS protein production by attenuating NF-κB that mediated iNOS gene expression, thereby decreasing the production of NO [48-49].

The present study found a significant decrease in SOD activity in all organs. It is known that accumulation of H2O2 during S.mansoni infection results in the inhibition of antioxidant enzymes such as SOD and CAT [50-51]. However, in the present study CAT activity was increased in hepatic tissue of mice infected with S.mansoni which in agreement with Mantawy et al. [52] who found an increase in the CAT activity in liver of infected mice, and attributed these changes to the accumulation of superoxide radicals and H2O2 and returned the elevation of CAT activity to protect against oxidative damage. On other side, Abu-El-Saad [53] found no change in the hepatic CAT activity in S. mansoni infected mice because CAT activity in liver was affected before the deposition of parasite eggs in the organ and then progressed. Also the present study showed an increase in the level of GSH, SOD and CAT in infected treated mice with ginger in comparison with infected group and this in agreement with many studies have also showed that ginger enhances the levels of these antioxidant enzymes [10,54-57].

The present study showed that PZQ treatment decreases the level of LPO and NO in all organs except in hepatic tissue in comparison to infected mice. This results in agreement with Eid et al. [51] who found an increase in NO level in hepatic tissue of PZQ treated animal and attributed that to activation of the immune system which increase the level of IFN–γ that can activate macrophages to produce NO and other inflammatory mediators [58]. Moreover, treatment of infected mice with PZQ increased the GSH level and the activity of SOD and CAT [2,52] and normalized the glutathione reductase and glutathione–S- transferase activities [59]. Finally, Abdel-Hafeez et al. [60] found PZQ diminishes oxidative stress in schistosomiasis by increasing antioxidant enzymes, however, MM and Shaker [61] returned that to the reduction in worm load. In conclusion, ginger supplementation due to its active constituents which have antioxidant and anti-inflammatory ameliorated the damage effect of S.mansoni infection like PZQ.