Laboratories require customized feedback on improving biomarker testing practices. A workshop was organized for laboratories that participated in a European external quality assessment scheme to resolve issues related to the estimation of neoplastic cell percentage and tissue quality for RAS testing for colorectal cancer. An interactive course about tissue quality took place to stress the importance of the pre-analytical phase. During a microscopic session, five H&E stained tumor tissue slides were discussed and neoplastic cell percentages estimated. Participants included 4 pathologists, 3 molecular biologists, a technologist and a clinical geneticist from 7 laboratories. In six laboratories, tumor contents are checked routinely by visual estimation by the pathologist. The average difference between the lowest and highest estimation was 22%. During the workshop the importance of the pre-analytical phase was stressed and feedback was provided. Such initiatives can contribute in improving biomarker testing standards in Europe

Since the introduction of precision medicine, where treatments are tailored to specific genetic alterations, clinical decisions rely on accurate test outcomes. For example, the treatment of patients with metastatic colorectal cancer (mCRC) with EGFR-targeting drugs requires a confirmed wild-type status of both the KRAS and NRAS genes (exon 2, 3 and 4) [1]. Correct test outcomes are dependent on both the quality of a test method and the specimen quality (e.g. tissue fixation, tumor size and cellularity, sample type) [2]. This requires harmonization in the pre-analytical phase, which is highly error prone [3,4]. External Quality Assessment (EQA) programs have been set up to ensure quality, however, additional customized feedback is also important for improving laboratory procedures [5].

False negative results can arise when the amount of tumor DNA in the sample is lower than the amount that is required for the test method. This can be translated into a minimum number of neoplastic cells [6]. Processes such as selection of the most optimal cell block, delineation of the area for macro-dissection and the estimation of the neoplastic cell content are crucial to ensure achievement of the minimum percentage of neoplastic cells. Despite that testing strategies are becoming more sensitive, the need for accurate estimation is as important as ever. The use of Next-Generation-Sequencing (NGS) proves that knowing the tumor cellularity is essential to make a distinction between signals and noise [7]. In addition, samples containing a low number of neoplastic cells require higher coverages [8,9].

Despite its importance in biomarker testing, there is currently no established method to optimally estimate the percentage of neoplastic cells [10]. Pathologists often receive a general training to estimate the percentage of neoplastic cells on hematoxylin and eosin (H&E) stained Formalin-Fixed Paraffin-Embedded (FFPE) tissue slides. Various ways for doing this exist and previous studies have indicated that estimates between different pathologists can vary [11-13]. A recent large European-wide study confirmed these findings [14].

An interactive workshop was organized to resolve issues related to tissue quality as part of a larger study on neoplastic cell content. The aim of this workshop was to provide laboratories customized feedback on their laboratory performance during the European Society of Pathology (ESP) Colon EQA scheme of 2016.

Laboratories participating in the 2016 ESP Colon EQA scheme (N=105) on a voluntary basis, were invited to an interactive workshop organized by the Radboud University Medical Center in The Netherlands. Initially, a survey was carried out focused on pre- and post-analytical stages related to the determination of the neoplastic cell content. During a microscopic session, neoplastic cell percentages were estimated for five H&E stained tumor tissue slides from mCRC specimen. Estimates were provided before and after an expert in molecular pathology illustrated good practices for selecting the area for DNA extraction (e.g. how to avoid necrotic areas and lymphocytes) and the determination of the neoplastic cell content. This explanatory discussion gave pathologists the opportunity to elaborate on the sample characteristics required to be considered when determining the neoplastic cell content. Participants were also asked to score the difficulty of the cases based on the presence of other cell types such as the infiltration of immune cells, mucus, necrosis and desmoplastic stroma (Score 0=very straightforward-score 3=very hard to determine).

Table 1: Characteristics of the laboratories that participated in the workshop. 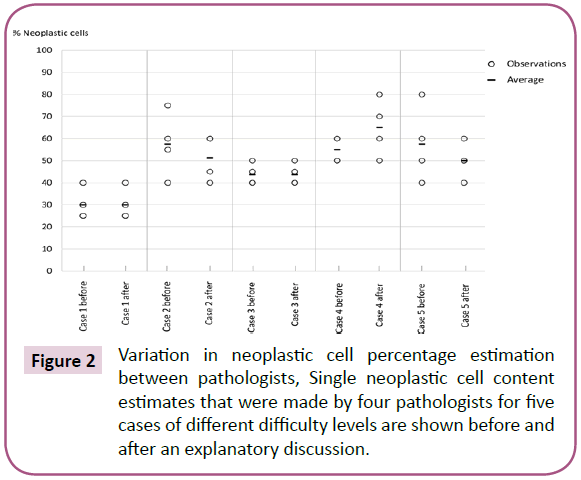 Figure 2: Variation in neoplastic cell percentage estimation between pathologists, Single neoplastic cell content estimates that were made by four pathologists for five cases of different difficulty levels are shown before and after an explanatory discussion.

*Participants scored the level of difference of the sample. A score between 0 (very straight forward) and 3 (hard to determine) could be given.

The existing EQA programs in Europe ensure high quality of biomarker testing. The workshop carried out at the Radboud University provided feedback to laboratories aiming to further improve the pathology center technical methods. Accurate estimation of the neoplastic cell content is important to ensure no samples are misclassified as wild type. During the workshop differences were observed for the indication of micro- or macrodissection and the estimation of the neoplastic cell content between the participants. Despite the low participant numbers, this study was able to identify the critical differences. These findings are in line with a recent study in which variation between neoplastic cell content estimates and tumor area delineations between different pathologists were calculated based on EQA results [14].

Both in the pre-and post-analytical phase of the testing process attention should be paid to the suitability of the starting material. When preparing the FFPE block, appropriate fixatives and fixation times should be used, as described elsewhere [15,16]. Hematoxylin and eosin stained slides from the FFPE blocks should be checked for their suitability based on the absolute and relative number of neoplastic cells. To avoid non-neoplastic cells to dilute the sample, a limited area can be contoured for macrodissection. The latter can be done by scraping the tissue from the slide or by coring the block. After molecular analysis it is important to include the estimated NCP on the testing report and to correlate it with 1) The minimum NCP required by the testing method and 2) The allelic frequency of the variants identified. If the NCP is lower or near the minimal requirement, this should be considered when interpreting the testing result. FFPE: formalinfixed paraffin-embedded, NCP: neoplastic cell percentage, VAF: variant allelic frequency.

Setting a standard for neoplastic cell percentage determination is thus required to improve biomarker testing. ISO 15189, an international standard for medical laboratory testing, clearly states that laboratories have to select procedures which have been validated for their intended use and have to document these procedures [17]. Yet, most laboratories see this step as ‘trivial’ and have no written procedures. A study has already been set-up by the KU Leuven and Radboud University in which experts from ten European countries aim to obtain consensus regarding a best-practice guideline for the determining of the neoplastic cell content.

Laboratories should acknowledge the importance of interobserver tuning within their laboratory on a regular basis, which is also a requirement for ISO 15189 [18]. A discussion between pathologists regarding factors impacting the neoplastic cell content percentage (e.g. infiltration of immune cells and necrosis) could also be useful. Finally, pathologists need to continuously evaluate their techniques by regularly re-estimating samples’ neoplastic cell content.

Apart from the determination of neoplastic cell content, other pre-analytical stages should be validated and documented, taking into account other factors that may impact the test outcome. Further research into the pre-analytical phase would be beneficial to investigate this in systematic way. The post-analytical phase could also be improved by adding a warning note when the neoplastic cell content reaches the minimal percentage needed for the test method.

As a conclusion, this paper describes a pathology workshop that was carried out aiming to further improve biomarker testing in Europe. During the workshop the importance of the pre-analytical phase was stressed and feedback was provided to the participant pathologists. Such initiatives are important as they contribute to paving the way towards standardized practices and improving biomarker testing standards in Europe.

The study was funded by Amgen (Europe) GmbH.

The authors want to thank the participating laboratories for their input to the workshop.