Forskolin Effect on FOXO1 Expression and Relationship of FOXO1 Activation to Oxidative Stress: From Molecular to Therapeutic Strategy

Background: Reactive Oxygen Species (ROS) production has been established as an essential contributor in the development cardiotoxicity. The increase of ROS production simultaneously leads to the inhibition of anti-oxidant systems. Forkhead transcription factor O1 (FOXO1) plays an important role in regulating metabolism and oxidant stress. Clozapine was used to induce cardiotoxicity. Forskolin the well-known anti-oxidant and anti-inflammatory agent was used to modulate the effect on both FOXO1 gene and its target gene catalase and to what extent it may protect against clozapine-induced cardiotoxicity.

Results: These effects are achieved by the ability of Forskolin to modulate the expression of Foxo-1 and catalase, the levels of CKMB, troponin I, GST, MDA, and TNF- α, Caspase-3 were decreased, histopathological changes were improved. Forskolin reduce cardiomyocytes damage, and improve cardiac function by decreasing oxidative stress.

Conclusion: Forkolin with its biological activities and anti-oxidative effects control cardiotoxicity induced by ROS in addition to its anti-inflammatory activity. This may be considered as therapy in cardiac problems management.

Forskolin (FSK) is a labdane diterpene contains some unique functional elements, including the presence of a tetrahydropyranderived heterocyclic ring, it is commonly to raise levels of cyclic AMP (cAMP) in the study and research of cell physiology. FSK activates the adenyl cyclase and increases intracellular levels of cyclic AMP (cAMP) [1]. cAMP is an important second messenger necessary for the proper biological response of cells to hormones and other extracellular signals in cell communication [2].

Forehead box, class O1 ( FOXO1) is one of transcription family factor. It is conserved as a DNA binding domains subjected to posttranslational modification. Such modifications can increase or decrease the transcriptional activity of FOXO1 and play important role in oxidative stress and regulating cellular metabolism [3]. FOXO1 transcription factors regulate the expression of genes that coding for antioxidant activities [4].

Catalase is an endogenous antioxidant enzyme, any alteration in function of catalase affect the protection against oxidative stress [8]. For unknown reason there is low catalase activity in the heart that responsible for the high sensitivity of this organ to oxidative stress [9]. Under conditions of hypoxia and ischemia, transcription factors interact with FOXO1 and to enhance their transcriptional function [10].

Clozapine (CLOZ) is an atypical antipsychotics tricyclic benzodiazepine derivative, it appears to be particularly beneficial in patients with schizophrenia mainly who are unresponsive or intolerant to other typical antipsychotics [11]. In spite of high clozapine efficacy, its clinical use has been limited due to its cardiotoxicity [12].

The mechanisms underlying the development of CLOZ-induced cardiotoxicity are complex and not fully understood. Previous studies showed increased release of inflammatory cytokines [13]. Many reports have shown an increase in the level of Reactive Oxygen Species (ROS) [14]. Also, CLOZ treatment has been associated with increased levels of the catecholamines, norepinephrine and epinephrine. Hyper-catecholaminergic states can significantly exacerbate myocarditis in both animals and patients [15]. Our study aims to investigate the possible prophylactic effects of forskolin pretreatment against clozapineinduced cardiotoxicity in rats. The objective of present study was to determine the effect of FSK on FOXO1 expression by RT-qPCR and the relationship of FOXO1 activation to oxidative stress.

Thirty two adult male albino rats (at 10–12 weeks old) weighing 220-250 g were used in this study after 7 days of acclimatization. The animals were obtained from Helwan farm (Holding Company for Biological Products and Vaccines; VACSERA, Giza, Egypt). The rats were kept under 12:12 h light-dark cycle and were given standard laboratory diet and water. Dealing with animals and experimental procedures were done with respect to the roles of the US national institute of health on use and care of experimental animals. The experimental protocol was approved by the Animal Research Ethics Committee of the Faculty of Medicine, Benha University, Egypt.

Forskolin and clozapine powder were obtained from Sigma- Aldrich Chemical Co. (St Louis, Missouri, USA). All drugs were dissolved in distilled water and were freshly prepared before use.

At the end of the experiment a midline abdominal incision was performed and blood was collected from abdominal aorta and the serum was immediately separated by centrifugation in a refrigerated centrifuge (4°C) at 3000 rpm for 20 minutes. Then serum rapidly frozen and stored in liquid nitrogen (−80°C) for measurement of oxidative stress markers and expression of FOXO1 and catalase by RT- PCR. The hearts were collected and dissected into two longitudinal halves; the first one was placed into formalin 10% for histopathological.

Measurements of troponin I and creatine kinase (CKMB)

About 100 mg of heart tissue were homogenized in 2 mL of an ice-cold buffer composed of 50 mmol/L potassium phosphates, 1 mmol/L EDTA, pH 7.5, using a mortar and pestle. The homogenate was then centrifuged for 15 min at 4°C, and the resultant supernatant was kept at -20°C until analysis. The biochemical antioxidant marker manoaldehyde (MDA), gluthathiones transferase (GST), Caspase-3 and Tumor Necrosis Factor (TNF) alpha were measured using a colorimetric method according to the manufacturer’s instructions (Bio diagnostics, Dokki, Giza, Egypt).

Total RNA was extracted from serum by using RNA Mini Kit (Qiagen, USA) according to manufacturer’s instruction where the quantity and quality of RNA were evaluated by Nano drop (USA). Ratio of readings at 260 nm and 280 nm (A260/280) provide an estimate of purity of RNA pure RNA had A 280/260 ratio of 1.9-2.3(OD260/ OD280). RNA (5 μg) was then reversed transcribed using revert aid TM first strand cDNA synthesis kit (Ferments life science, USA) then cDNA was subsequently amplified with the Syber Green PCR Master Kit (Applied Biosystems, USA) in a 48-well plate, PCR was performed in a 30 μ reaction volume containing 5 μl lcDNA, 2.5 μl forward primers, 2.5 μl reverse primers, sequences were designed as follows: FOXO1 gene: forward GCCGTGCTACTCGTTTGC and reverse CTTGGGTCAGGCGGTTC; catalase, forward TATTGCCGTCCGATTCTC and reverse ATGCCCTGG TCAGTCTTG, and GAPDH was used as an internal control and the primer sequence was: forward CAGTGCCAGCCTCGTCTCAT and reverse AGGGGCCATCCACAGTCT TC.5 μl of DNA polymerase, 7.5 μ syber green and 7.5 μ buffer. PCR amplification conditions were done in one step real time PCR instrument (Applied Bio systems, USA) as follows: initial denaturation at 94°C for 5 min, followed by 30 s at 94°C, 35 s at 54°C, and 2 min at 72°C for a total of 35 cycles and a terminal extension at 72°C for 10 min [17,18].

Relative quantification of FOXO1 and catalase performed with the 2-ddCt method, and analyzed by ABI prism 7500 the Boxplot software and values were normalized to the quantity of GAPDH. After amplification, 5 μl of PCR products were resolved on a 2% agarose gels, and DNA bands were visualized by UV light in FoxO1 and catalase genes. 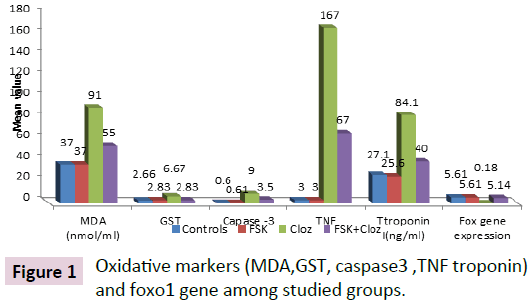 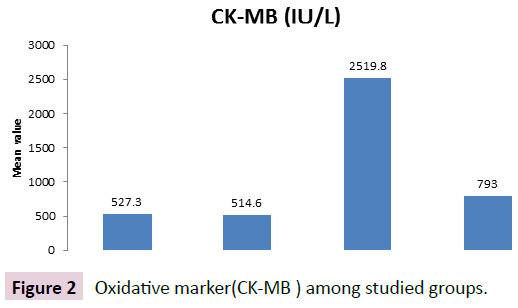 Figure 3 showed the ROC curve for prediction of fox gene in in cardiotoxicity (Table 4). 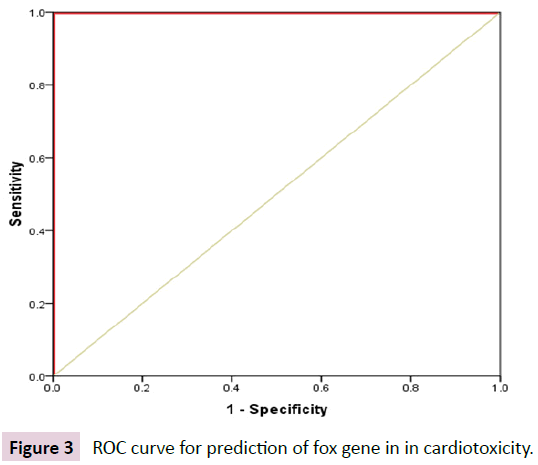 Figure 3: ROC curve for prediction of fox gene in in cardiotoxicity.

Table 4: ROC curve for the performance of fox gene in prediction of cardiotoxicity.

Heart tissue specimens were fixed in 10% neutral buffered formalin, embedded in paraffin, and then cut in sequential sections of 4–5 mm thickness. These sections were stained with routine H&E (Figure 4a-d). 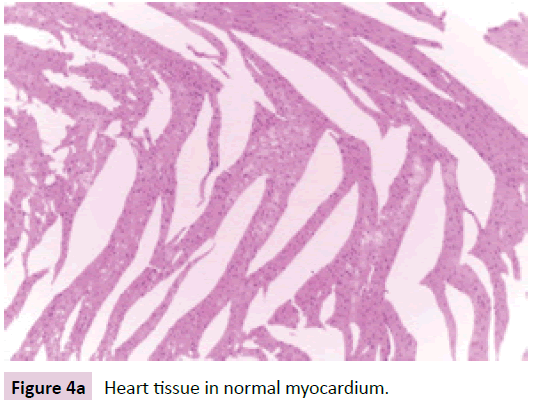 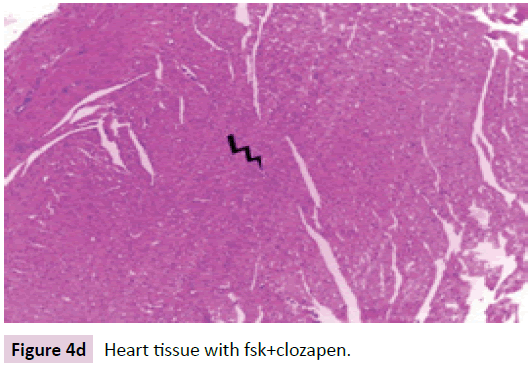 Gel electrophoresis of amplified products of FoxO1 and catalase genes 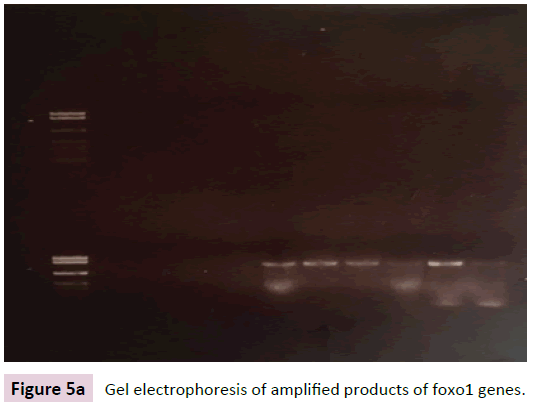 Figure 5a: Gel electrophoresis of amplified products of foxo1 genes. 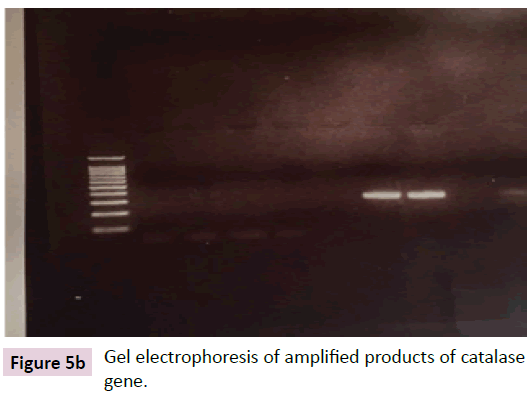 Figure 5b: Gel electrophoresis of amplified products of catalase gene.

Myocardial cell injury can lead to release of ROS [19]. Cell injury in the ischemic area also causes infiltration of neutrophils, which produce more ROS and cytokines as tumor necrosis factor-α (TNF-α) which trigger mitochondrial release of more ROS with a relative deficit in the endogenous antioxidant defenses can cause myocarditis, contractile dysfunction and cardiomyopathy, clozapine-induced myocarditis has been associated with an increased release of inflammatory cytokines [13]. The released free radicals and ROS can attack membrane phospholipids, increasing lipid peroxidation and damage to the myocardial cell membrane [20] this process is reflected as elevated MDA and GST levels [21].

In the present study induction of cardiotoxicity by clozapine led to marked down regulation of both FoxO1 and catalase genes as well as aggressive increase in CKMB, troponine I, GST, MDA, TNF- α, Caspase-3 levels and histopathological abnormalities.

Transcription factors of the fork head box, class O (FoxO) family are important regulators of the cellular stress response and act as cellular antioxidant defense [22]. The fork head-type transcription factors control expression of antioxidant genes such as catalase [8] The interaction between FoxOs and co-regulators and antioxidant prove redox sensitive regulation of FoxO gene expression The production of Reactive oxygen (ROS) is dependent on the expression and activity of anti-oxidant enzymes [23].

This indicate that FoxO protect cell from oxidative stress by upregulating anti-oxidant gens like (CAT) the down regulation of CAT mRNA in cardiotoxic rats suggested that ROS/FOXO pathway was dysfunction [28]. The balance between enzymatic and non-enzymatic mechanisms control production of ROS and transform ROS into non-toxic molecules in myocardium Antioxidant enzymes are activated during oxidative stress and also after activation of cytokines [29].

Catalase is endogenous antioxidant enzyme, functions in detoxification of free radicals in the myocardium any alteration in function of catalase affect the myocardial protection against oxidative stress [8]. Foxo-1 gene or its target gene catalase act as antioxidant enzymes that affect the intra- and extracellular redox state by catalyzing dismutation and reduction of ROS [30], the conversion of ROS to oxygen and water require presence of catalase and low catalase activity in the heart, however this organ is very sensitive to catalase. The presence of catalase is considered as cardio protection against oxidative injuries that leads to apoptotic cell death or arrest cell cycle.

Downregulation of FoxO1 expression correlating with the increase in oxidative marker (MDA,GST,TNF) in cardiotoxic group, these markers increased in the group receiving clozapine at 12-week. Pretreatment with forskolin decreased the oxidative markers significantly compared to non-treated rats these results are in agreement [32] with These results suggest that FSK decreases oxidative stress and improve the heart injury [32] indirect increase in the anti-oxidant capacity by modulating genes expression and by inducing the endogenous anti-oxidant enzymatic defense system [33] may increase the expression of FoxO1, which increases its antioxidant target genes (CAT) to reduce ROS level in the heart [17].

These data are in line with [34] that reported that forskolin has antioxidant properties, inhibits the production of ROS and thereby, prevents the fragmentation of DNA and ultimately reduced cell necrosis. Our results are also in agreement with the previous studies which have shown that forskolin have an anti-inflammatory effects by an antagonistic effect on TNF alpha, and its reduction of the levels of interleukins 1β, 6, and 8 [35]. Another study showed that forskolin affected oxidative stress which interacts in several cardiovascular and metabolic pathologies [36].

In conclusion the produced beneficial effect of forskoline in protection against cardiotoxicity due to its ability to increase FOX gene expression, which increases its antioxidant target genes CAT to reduce ROS level and may regulate cell survival and/ or apoptosis well as its anti-oxidant, anti-inflammatory and antiapoptotic properties. This may open a new therapeutic window for cardiac patients.

We gratefully thank the technical and administrative staff at the departments of pharmacology, biochemistry and pathology, Faculty of Medicine, Benha University for their assistance and support.

Authors declare no conflict of interest.